Following the appointment of James Brokenshire MP as the new Secretary of State for the Ministry of Housing, Communities and Local Government, Luke Pollard MP for Plymouth Sutton and Devonport has asked him to assist Plymouth Community Homes with the estimated £13million it will cost to reclad the Mount Wise tower blocks.

Following the Grenfell Fire, the Prime Minister on 22 June said, “we cannot and will not ask people to live in unsafe homes.” But despite failing safety tests in the wake of the fire, similar combustible cladding remains on three tower blocks in Mount Wise, Devonport in Plymouth.

Plymouth Community Homes estimate that without Government support to assist with recladding, this will mean 220 fewer new homes for the city or 413 fewer homes refurbished in Plymouth.

Luke Pollard MP has previously called for the £1.1bn that Sajid Javid MP gave back to the Treasury, as reported by the Huffington Post on 4 March, that was apparently not required, to be spent on these essential works.

“The Grenfell fire tragedy remains a national emergency. Residents in Plymouth do not deserve to go to bed fearful about the safety of their homes.”

“Plymouth Community Homes have already put in place 24/7 fire patrols, better fire doors and new sprinklers. But I’m sure you agree as a non-profit, it is inappropriate to expect them to pay such a large bill after Government assurances.

“I am optimistic that your appointment will be fresh start for the people of Lynher, Tavy and Tamar Houses and that you will do what your predecessor failed to do to support residents and look at ways to fund essential measures to ensure a similar event like Grenfell cannot happen again in Plymouth or anywhere else in the UK.”

Last week, Luke Pollard MP presented a petition to Parliament, started by Devonport Councillor, Bill Stevens and signed by hundreds of people across Plymouth, including the leader of the Labour party, Jeremy Corbyn MP calling for the Government to allocate emergency funds to pay for the recladding of the Mount Wise tower blocks.

See the full text of Luke’s letter below: 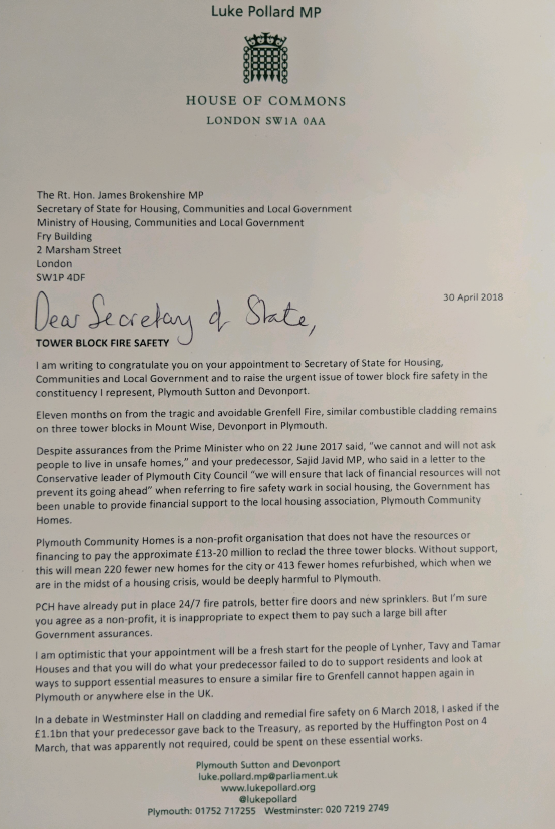