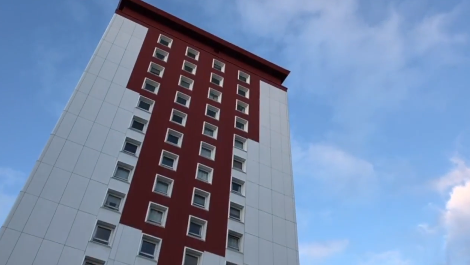 Almost one year after the Grenfell fire, Government seems to have given in to demands of local campaigners in Plymouth to pay for the emergency recladding for the Mount Wise tower blocks.

This follows a long term campaign from Plymouth Sutton and Devonport MP Luke Pollard, and a petition by Devonport Councillor, Bill Stevens calling on Government to help Plymouth Community Homes with the estimated costs of £13 million for the essential work.

Today at Prime Minister’s Questions, Theresa May announced the Government will fully fund the removal and replacement of dangerous cladding by councils and housing associations, estimated at £400 million. Despite verbal assurances of support from central Government in the wake of the Grenfell Fire, it taken almost eleven months for promises to be matched with funding.

Luke Pollard said this meant justice for the people of Devonport but criticised the delay in the decision. Despite failing safety tests in the wake of the fire, similar combustible cladding still remains on three tower blocks in Mount Wise, Devonport.

The Labour MP has also called for Government to make sure Plymouth Community Homes is given the full funding that it needs. There are 153 social housing blocks with combustible cladding. Split evenly the £400 million fund would be around £2.6 million per block which would not cover the estimated £13 million the Mount Wise tower block needs.

Until the announcement today, Plymouth Community Homes was set to receive no financial support from Government and would have paused building 220 new homes or 413 refurbishments for the city to pay for the emergency.

Luke Pollard MP recently presented a petition to Parliament, started by Devonport Councillor, Bill Stevens and signed by hundreds of people across Plymouth, including the leader of the Labour party, Jeremy Corbyn MP calling for the Government to allocate emergency funds for the recladding.

“I’m pleased that the Prime Minister has finally listened to communities like Mount Wise who have rightly been asking for Government support to pay for tower blocks to be reclad. This is good news but it should not have taken eleven months for this funding to be made available.

“We have been here before though. After the Grenfell fire, the PM pledged support, and then took it away. What we need to see now is a firm government commitment to funding the full bill of recladding the Mount Wise tower blocks. Not some of it, not part of it, but the entire cost of recladding. I also want to see the timetable for this work to be set out by Ministers for paying for this work so Plymouth Community Homes can get on and reclad this work.

“My party said from day one that Labour would fund this work. On his recent visit to Mount Wise, Jeremy Corbyn reiterated Labour’s support for tower block communities. I am so proud of the response of Mount Wise in the wake of the Grenfell Tower. Community campaigners, Devonport’s councillors and local residents have been determined to get the money needed to reclad the Mount Wise tower blocks. I have spoken in the Commons time and time again calling for this funding and I am pleased this looks like a campaign we have won and won together. We now need to get the money from Government and so this work can begin.

“I won’t stop speaking up for the people of Devonport and until the combustible cladding is removed from Lynher, Tamar and Tavy Houses I will continue to demand action and full funding for this work.”

Luke Pollard MP previously called for the £1.1bn, that the Ministry of Housing gave back to the Treasury, as reported by the Huffington Post on 4 March, that was apparently not required, to be spent on these essential works.

This month, following the appointment of the new Secretary of State for the Ministry of Housing Luke Pollard MP wrote to him asking for a “fresh start for the people of Lynher, Tavy and Tamar Houses,” and to assist Plymouth Community Homes.