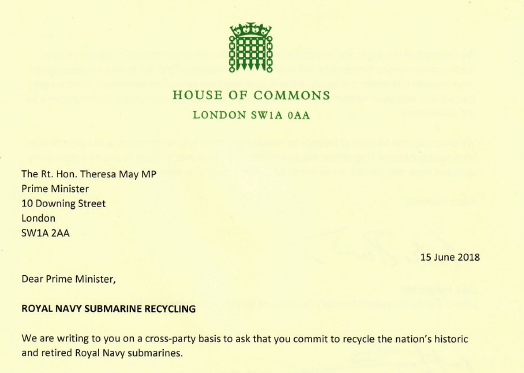 Today a cross party campaign has been launched by members of the Labour, Conservative and Scottish National Party, calling on the Government to recycle the UK’s legacy and retired Royal Navy submarines.

Every nuclear submarine that the UK has ever had, we still have. There are 13 old nuclear submarines tied up alongside in Devonport – the oldest is now nearly 50 years old (The oldest is HMS Valiant which is 54 years old – launched in 1963 at the height of the Cold War) and 7 submarines in Rosyth alongside the dock where the new carrier HMS Prince of Wales is under construction.

In a letter to the Prime Minister the three MPs: (Luke Pollard, MP for Plymouth Sutton and Devonport, Trudy Harrison, MP for Copeland and Douglas Chapman, MP for Dunfermline and West Fife) ask the PM and other party leaders to fund a programme of submarine recycling using the same principles as the civil nuclear programme. This programme seeks to clean up the nation’s civil nuclear past. 17 old nuclear sites are currently being cleaned up by the taxpayer-funded Nuclear Decommissioning Agency.

The MPs are calling for the budget for the nuclear clean-up programme to be extended to include the legacy nuclear submarines.

Luke Pollard, MP for Plymouth Sutton and Devonport, where 13 old submarines are in long-term storage said:

“Plymouth and Rosyth cannot be asked to store old nuclear submarines indefinitely. We need a proper funded plan and using the same principles as civil nuclear clean-up to safely, sustainably and securely recycle the out of service nuclear submarines would be a sound idea. It is time the Government was up front about the scale of the nuclear clean-up of old Royal Navy submarines. I expect most people will be surprised to learn that every old nuclear submarine the Royal Navy ever has, we still have. It is time to fund a proper dismantling and recycling programme and as the principles and funding already exist for civilian sites, extending that to these subs makes perfect sense.”

“It falls on this generation of politicians to take nuclear clean up seriously. Sellafield in my constituency is a world-leading centre of excellence for decommissioning with a track record of safely dealing with legacy waste.

“It is surely our responsibility to prioritise the safe clean-up of these submarines which would support our highly skilled workforce, innovative technologies and advanced manufacturing in Plymouth, Rosyth and also in West Cumbria. Decommissioning also enables the training of thousands of apprentices across the country – this pipeline of work will support the continuation of their training.

“This is important for our generation and future generations and we must take responsibility.

“I wholly endorse this campaign.”

MP for Dunfermline and West Fife where 7 submarines are stored at Rosyth, Douglas Chapman, said:

“The principles of nuclear clean-up have been established in civil nuclear decommissioning. Rosyth dockyard faces an uncertain future with new ship builds and this recycling proposal could support many hundreds of jobs in Scotland. This isn’t dead money. Submarine recycling should be seen as a new economic opportunity to spread our expertise and intellectual property around the globe.”

The letter has also been sent to Jeremy Corbyn MP, Leader of the Labour Party, Nicola Sturgeon, Leader of the Scottish National Party and Vince Cable MP, Leader of the Liberal Democrats. The aim is to create a political consensus that action must be taken to recycle these old submarines and that using the principles of the civil nuclear decommissioning agency, and allocating additional funding to its work to cover nuclear submarines too, is a proportionate and sensible way forward. 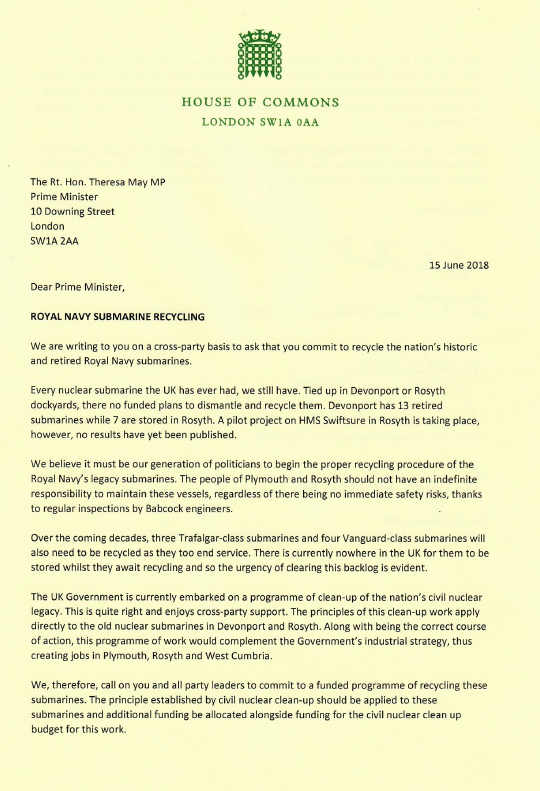 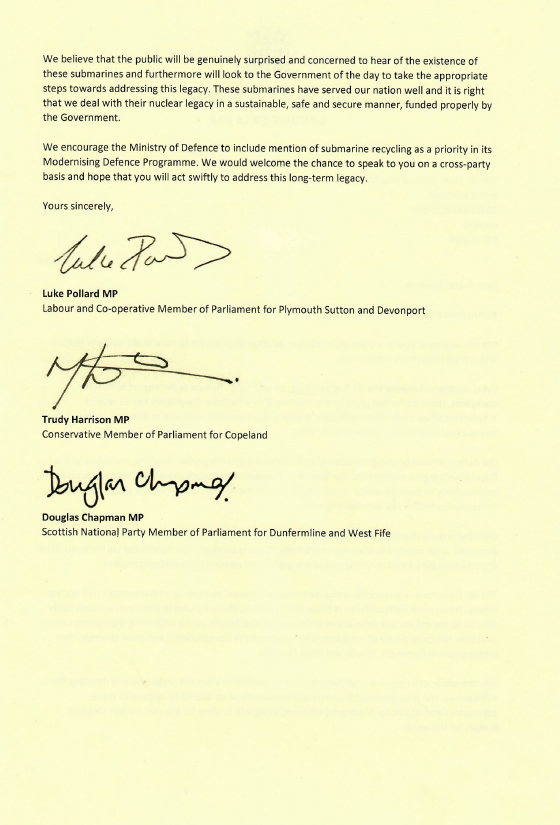