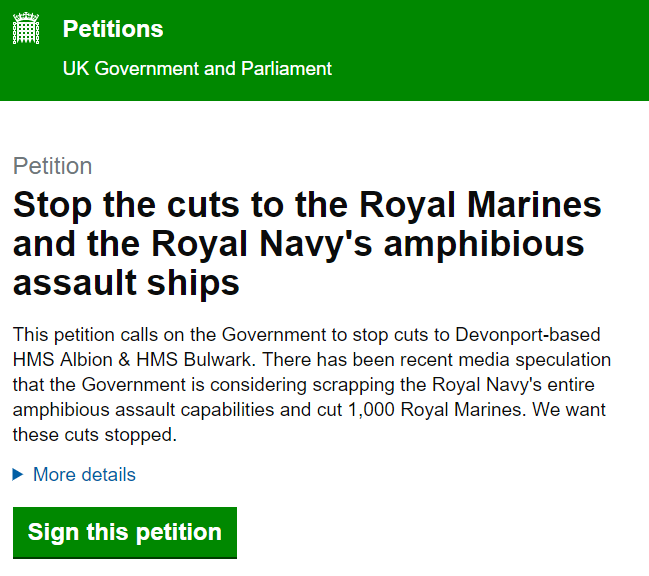 This week Luke has continued his campaign against possible cuts to the Royal Navy and Royal Marines and launched a public and parliamentary petition (which you can sign here). Luke has called for the public to back his petition to put pressure on the government. This follows Luke’s letter to the Secretary of State Sir Michael Fallon asking him to end speculation that the Conservative Government are considering scrapping Devonport-based HMS Albion and HMS Bulwark, and calls on the Government to reaffirm commitment to the Royal Marines.

There has been persistent speculation about cuts to Plymouth’s Armed Forces for months. This was most recently highlighted in a BBC article on 6 October, reporting that the MoD are considering scrapping Devonport-based HMS Albion and  HMS Bulwark in a cost saving plan. Luke is concerned that if Devonport loses its amphibious assault ships, the Royal Navy would lose its capability to carry out amphibious operations completely.

Luke believes that these leaks are a deliberate strategy to soften us up for bad news and real cuts. Devonport Dockyard and naval base is the backbone of Plymouth’s economy and the Royal Navy. Scrapping the UK’s amphibious assault capabilities could be a prelude to reducing the size of the UK’s Royal Marines, massively reducing the role of Plymouth in terms of our national defence.

On this issue, Luke has been able to question a Government Minister and the Leader of the House, but talk of defence cuts were dismissed as “nonsense.” Last week, Luke launched parliamentary Early Day Motion 391, ‘Save the Royal Navy’s Amphibious Assault Capability’, which calls for MPs to pledge their support. This week, Luke has also launched a public petition which is can be signed on the parliamentary petition website titled, ‘Stop the cuts to the Royal Marines and the Royal Navy’s amphibious assault ships’, which members of the Armed Forces, as well as the public, will be able to sign to show their support.

“I am proud to launch this petition today to stop cuts to the Royal Marines and Royal Navy’s amphibious assault ships and I encourage everyone from the public to back this campaign. I have always been a firm believer in cross-party work and am keen to work cross-party to stop these cuts. So I am also asking the public, whatever party they support, to contact their MPs to back this campaign in Parliament as well as signing the petition themselves. The purpose of the petition is to raise awareness, show the Government the levels of concern cross the country about this speculation has raised and force a much needed debate on the issue.

“Scrapping all the Royal Navy’s amphibious assault ships would be the biggest betrayal of Devonport by any Government in a generation. I want people from all across the UK who believe in preserving both the Royal Navy and Royal Marines, and our national security, to sign the petition and write to their local MP urging them to sign EDM 391. I want us to send a firm, cross-party message to the government that people oppose the cuts which they are proposing.

“Following the speculation, I asked the Government Minister and the Leader of the House if she would do something about the sovereign defence capability gaps that are clearly emerging in our Armed Forces, and for a general debate to inform the MOD’s decision on these cuts. But instead, talk about defence cuts was dismissed as “nonsense.”  When the Tories have scrapped HMS Ocean, announced the closure of Stonehouse Barracks and the Royal Citadel, when they’ve cut the number of frigates based in Devonport, it’s not nonsense to be concerned that more cuts, especially with constant leaks and rumours, are on the horizon.

“In uncertain times, we need a strong Royal Navy. Scrapping three of Devonport’s most capable ships will remove our nation’s amphibious capabilities and usher in dark clouds over the Royal Marines too. As the son of a submariner I know how vital theses Royal Navy jobs are for Plymouth and I won’t let the Government cut them without one hell of a fight.”