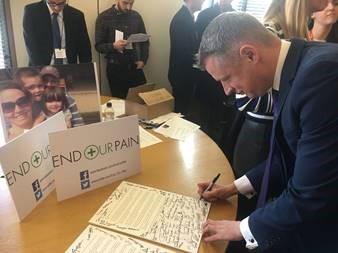 Luke Pollard MP has pledged support to 6 year old Alfie Dingley and his family in their quest to secure access to medical cannabis to alleviate Alfie’s very rare and severe epilepsy.

Who is Alfie Dingley?

Alfie is one of nine boys in the world with a genetic condition which causes him to  suffer up to 150 life-threatening seizures per month, each one so severe he is rushed to hospital.

Why does he need medical cannabis?

The only treatment available in the UK is IV steroids which doctors say are causing him mental and physical harm that could result in premature death.

When Alfie was taken to Holland, medical cannabis cut his seizures down to just one or two less severe ones per month which could be controlled at home.

The body of evidence from across the world has been enough to persuade 29 US states and 12 EU member countries to legalise access to medical cannabis.

“We have been so moved by the outpouring of support from people the length and breadth of Britain.  And we have been heartened by the support of MPs and members of the House of Lords from across party lines.  When we took Alfie to Holland we saw with our eyes that medical cannabis works for him, cutting his seizures down to just one or two less severe ones per month which could be controlled at home. Access to the oil meant Alfie had the quality of life he deserves, and we were able to be a normal family, not gripped by fear of the next life-threatening seizure.

“The delay in securing the Home Office licence that Alfie needs is putting his life at risk. Since we returned from Holland last month he has already been hospitalised three times.   We’re very grateful to Luke Pollard for his support.”

“I have received countless letters and emails about Alfie from people in Plymouth. Alfie’s family have been huge pillars of strength for Alfie and I admire their courage and determination in fighting for access to the medication little Alfie needs. I pledged my support to Alfie’s mum to join their fight and I signed up to do what I can to bring focus on this issue and get Alfie the medication he needs. Ministers must pay attention to Alfie’s case and make sure that all options are considered to make sure Alfie has the best possible quality of life.”

“Alfie’s case is the latest in a long line of examples that have led to more calls for legislation to permit the medical use of cannabis, and I believe the Government should look carefully at the case for the use of cannabis or cannabis products as a medicine specifically.”