Today Luke Pollard, MP for Plymouth Sutton and Devonport has written to the Secretary of State for Transport to raise concerns following frequent cancellations to CrossCountry services due to poor weather.

In his letter, Luke Pollard says it is unacceptable that the current stock of CrossCounry trains are unfit to withstand all year round weather conditions at Dawlish and Teignmouth. The engines on these trains has been known to short circuit when they are hit by the saltwater coming off the waves and sea spray. CrossCountry now starts and ends trains at Exeter when there is bad weather to prevent the Dawlish line being blocked by broken down CrossCountry trains.

The CrossCountry train franchise is shortly to be re-let and the Plymouth MP has asked the Secretary of State to require future franchises to buy new trains with the ability to cope with poor weather. Current rolling stock lacks the capacity required to carry passenger demand and have a key fault that means they are unable to pass through Dawlish when the waves crash over the track at Dawlish and Teignmouth.

The letter also asked whether the current CrossCountry franchise holder Arriva are breaching provisions by failing to provide services to Plymouth and Cornwall due to the frequent service cuts due to bad weather.

“Plymouth’s rail service was hit yet again this week as CrossCountry cancelled trains to the far south west due to waves hitting the track at Dawlish and Teignmouth. Plymouth is served by two train operators, GWR and CrossCountry and we need both fully operational to support our local economy.

“The cancellation of trains due to bad weather is growing increasingly unacceptable. We need urgent action from Ministers to ensure that these trains are replaced with new rolling stock that can survive weather all year round. It is embarrassing and damaging for our region that decades old Great Western Rail trains can get through Dawlish and the newer Cross-Country trains cannot in bad weather.”

In March earlier this year, Luke Pollard MP criticised the Government’s South West Rail Strategy, calling it a sham that failed to provide any new funding. There was no new money announced for railway upgrades in the far south west in the strategy Luke branded a “sham” and local Tory MPs called “disappointing”. Labour has committed £2.5bn to upgrade and enhance the south west’s train line over the next ten years, following all recommendations proposed by the Peninsula Rail Task Force report. 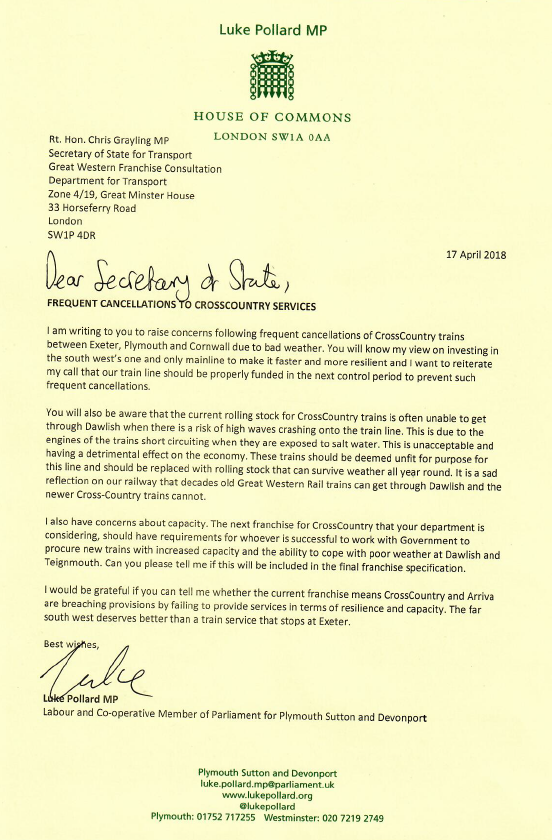