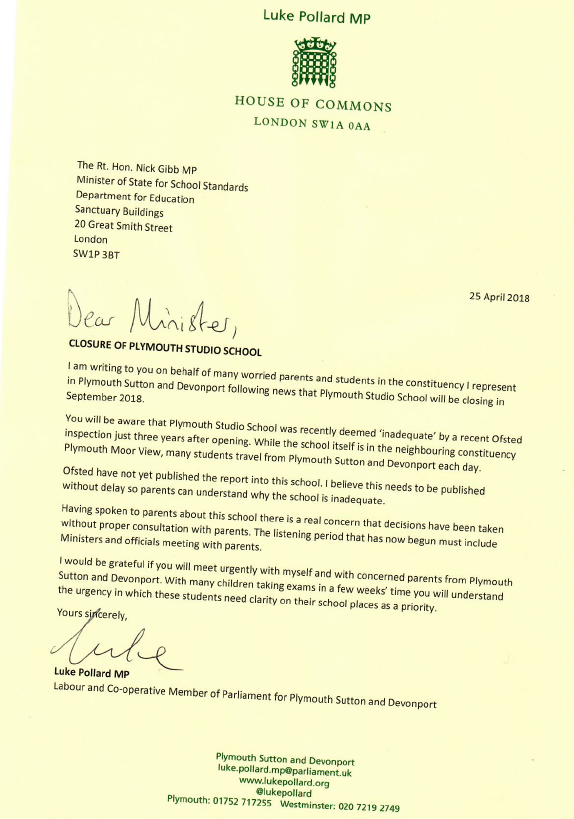 Luke Pollard MP has written to parents who attended his recent drop in event to discuss the closure of the Plymouth Studio School. Since the event Luke has spoken to the Deputy Regional Schools Commissioner and Plymouth City Council and answered a series of questions asked by parents at the drop in.

The full text of the email Luke has sent to parents who attended the drop in is below, as well as the answers to questions Luke was asked to find out:

Email to parents who attended the drop in

Thank you for attending my recent drop in event to discuss the closure of the Plymouth Studio School. Since we met I have spoken to the Deputy Regional Schools Commissioner and Plymouth City Council. I have tried to contact the trustees and will continue to do so.

You asked me to find out the answers to a number of questions at the event. The questions and answers are below. The key thing I learnt from asking these questions is the sheer importance of the listening period for parents to make clear what they want to happen next and what needs their child has. I also impressed upon the groups I spoke to the importance of having a public forum for parents to ask the Trustees, the school, the Regional Schools Commissioner and Plymouth City Council questions about the closure and what will happen next.

I find the lack of information being given to parents very disturbing and the communication failures from the trustees very worrying as well. The timing of the announcement has been unhelpful especially as it came during Purdah -; the period just before an election -; meaning that the Regional Schools Commissioner was unable to speak to parents. I know how disruptive this has been to the young people taking their exams. I hope that the public meeting helps parents understand the decision and what options are available to them and their children.

I intend to be at the public meeting to help parents and young people who live in the area I represent. In the meantime, if I can help please do contact my office on 01752 717255 or email luke.pollard.mp@parliament.uk. I hope these Q&As will help.

1. Why was the announcement made just before exams?

The Trust took the decision to announce the closure of the school with time for parents to find a new school for their child before the new school year starts. The timing before the exams was unfortunate but the timing of the local elections does not seem to have been a factor in the decision, so I understand. This would be a good question for the Trustees to answer at the public meeting.

2. What provision being put in place for prospective students due to start in September.

Parents of children who have not yet started at the school should contact Plymouth City Council for a new school place at an alternative school. Special circumstances should be discussed with the City Council.

The biggest impacts are on the young people in Years 10 and 12 who still have another year of study to complete. My understanding is that the majority of Year 10 students now have a place in a different school. The school will need to confirm with the City Council where this new place is for safeguarding purposes. The majority of Year 11 students have not yet been placed elsewhere.

I have asked the question about whether provision for the students whose courses are not replicated elsewhere in Plymouth could be found. The Regional Schools Commissioner and Plymouth City Council agree with me that this is worth pursuing. The RSC notes that this would need to be ‘viable’ in terms of numbers. The precise numbers of children involved would need to be determined via the listening period and this underlines how important it is for parents to make representations in this period.

4. What help for SEN children

Plymouth City Council assure me that for all children where SEN needs are known (i.e. there is a current educational plan in place for that child) then an individual caseworker has been appointed and that child’s family has already been contacted where possible. It might be that there are children whose SEN status has not been confirmed with a formal plan or school-based assessment. In such circumstances you should contact Plymouth City Council with details of your child to discuss this matter.

5. What will happen to uniform costs for children moving to new schools who may struggle to pay?

Parents will need to pay for new uniforms. Plymouth City Council (PCC) does not receive funding to provide financial support for parents to afford uniforms. However, I believe these exceptional circumstances warrant the City Council approaching the Department for Education to ask for support for those parents who need assistance in buying new school uniforms. I will be supporting PCC in any attempts to request funding here.

6. Who owns school building after it closes?

The current school site is leased to the Trust by Marjon on a 125 year lease. The Government will consult on what should happen with the school buildings after the school closes. This consultation has not yet begun. The Regional School Commissioner noted that the favoured use would be ‘educational’ but would depend on expressions of interest made in this process.

7. Armed forces covenant says they can’t deploy people if kids are doing exams. What support are they giving to students with parents in the military?

The Covenant is there to ensure that armed service personnel, veterans and their families are not disadvantaged by their military service when compared to similar individuals and families in the civilian community. Plymouth City Council is investigating whether there are any implications for children of armed forces families under the Military Covenant.  PCC have a member of staff who can advise for armed forces families.

8. Can children apply for extenuated circumstances for their exams due to stress?

I have asked both the RSC and PCC about this question and they have said that applications need to be made by the school. Blanket applications for extenuating circumstances are unlikely to be accepted by exam boards but where there is a clear case this should be made on an individual basis. It was noted by PCC that even if the application is turned down it can be helpful for the young person to have a paper trail for them to refer to in the future (for college or university applications or when applying for an apprenticeship for instance).

9. When can parents question trustees and the Regional Schools Commissioner about their decision.

I have been frustrated that a public meeting for parents has not been called already. My understanding is that the Regional Schools Commissioner will chair a meeting on 18 May at 4pm. The location for this event will be the school. At this event the Trustees, the Regional Schools Commissioner and Plymouth City Council will be present to answer questions from parents. I also intend to go to support parents who live in Plymouth Sutton and Devonport.

10. Will Ofsted release any more information about school inspection

It is not usual practice for Ofsted to issue any further information once the report is in the public domain.

11. Can you challenge an Ofsted report?

It is possible to challenge an Ofsted report, but not at this stage. See https://www.gov.uk/complain-ofsted-report. A parent or member of the public can only contact the school or setting with concerns – they can’t complain to Ofsted direct. Complaints are usually concerned with the inspection process or the behaviour of an inspector. This usually revolves around an inspector ignoring evidence supplied by the school, or coming into the inspection with a fixed judgement already made, and looking for evidence to fit the judgement.

12. Have you written to trustees?

Yes. I have written to them seeking to understand what support they need from me as a local MP and when they intend to speak to parents. I hope that this will happen on 18 May. It has taken too long to date.

I am aware that some parents are experiencing problems with the email address given by the Regional Schools Commissioner for the Listening Period. I have spoken to the RSC and they are aware of the problems. They have asked me to reassure parents that the emails are still being received and that they have asked their IT team to remove the out office reply that is saying that no one monitors that email.

If you have any further questions don’t hesitate to contact Luke’s office on 01752 717255 or email luke.pollard.mp@parliament.uk