In joint letter with Exeter MP, Luke Pollard MP tells Transport Secretary time is running out this year to improve our train line in Devon

The joint letter states “time is running short” to fulfil funding asks from the Peninsula Rail Task Force Report, that could be delivered in 2018/2019. To do this, Network rail needs confirmation of funding by the end of the year.

The Peninsula Rail Task Force was set up by Conservative Councils in the wake of the 2014 storms. Their November 2016 report received cross-party backing and set out a 20 year plan to upgrade the South West train line.

The Peninsular Rail Task Force’s ‘Speed to the West’ study has identified a way to reduce journey times in line with the PRTF 20-year plan that requires immediate action. Improved line speeds between Totnes and Hemerdon from 60mph to 75 mph would see a reduction in journey time of 3 minutes. The rail industry has indicated this has a Benefit to Cost Ratio of 6.07, and development work is needed this year to allow delivery in 2018/19. To ensure this happens the following is required:

As the Government have not addressed the group’s recommendations in the budget, and both MPs fear this is a missed opportunity if the window closes by 2018.

“The budget contained billions for transport schemes in London and the Midlands but nothing for our urgent asks for our train line.”

“If the Government does not deliver the £600.000 needed for the speed upgrades on the track between Totnes and Plymouth, then the work that is due to take place on that stretch of track next year will only renew not upgrade the track.”

“This locks in slow journeys and means we miss the window for faster journeys. What is the government playing at? It is about time the far South West for our fair share for transport spending.”

Read the letter in full below: 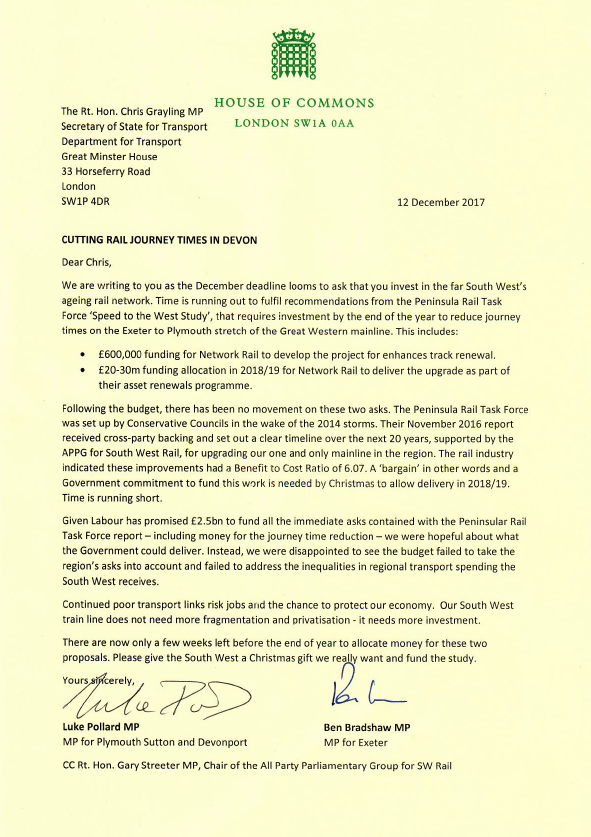