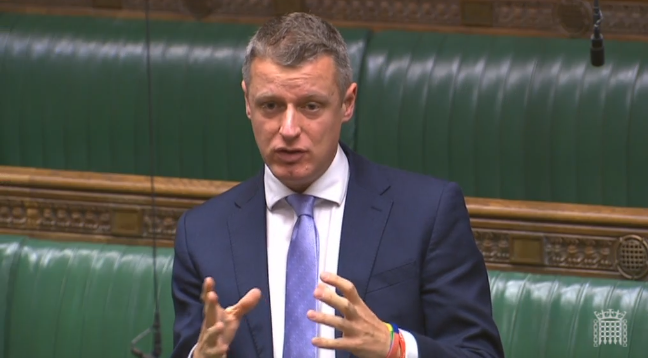 Luke Pollard, Labour and Co-operative MP for Plymouth Sutton and Devonport, today paid tribute to the work of the well-known Holocaust Survivor, Solly Irving in Plymouth.

During a debate on Holocaust Memorial Day, Luke thanked Solly, who passed away in 2017, for his incredible service recounting his own story of the Holocaust to school children across Plymouth.

Solly Irving was 87 when he died. He was born in 1930 in Poland. He was held in for concentration camps before being liberated in 1945. He lost his parents and his sisters in Nazi death camps. Solly dedicated his life to ensure each generation should never repeat the horrors his generation experienced.

“Today I was proud to pay tribute to the incredible, inspirational work of the well-known Holocaust Survivor, Solly Irving, who was known to generations of Plymouth school children.

“For almost 20 years, Solly told his horrific, heart rendering stories to 30,000 children in schools and colleges across Plymouth with the aim, through education, to stop the horrors he lives through from ever happening again.  In Solly’s own words we should all “Try to create a better world than the one I [Solly] grew up in.”

“The stories and experiences of Holocaust survivors need to live on and continue to be told. Holocaust Memorial Day is not only a day to remember the six million Jews and LGBT, disabled and Roma murdered by the Nazis but also more recent genocides in Rwanda and Bosnia.

Each year we should all remember those who have died but we should also recommit ourselves to tackle hate, in all its forms, head on and to stand up for an open, welcoming and decent city.”

You can watch Luke speak below: