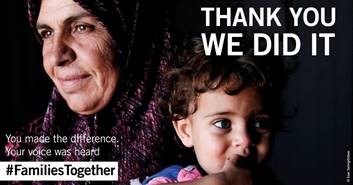 Last Friday Luke Pollard was one of 129 MPs who voted in favour of the Refugees Family Reunion Bill to make it easier for refugees to live with their family members who already live in the UK.

What was problem with the current rules?

Many child refuges are unable to reunite with family members in the UK because of the strict nature of the current immigration rules. Under these rules, dependent children under the age of 18 may only be sponsored to live in the UK by their parents.

What was the bill?

This Private Member’s Bill brought by Angus Brendan MacNeil MP would broaden the definition of “family” in current reunification provisions, allowing child refugees with other close family relations-such as grandparents, aunts and uncles, or adult siblings-to receive safe and obstacle-free refuge in the UK.  Mr. MacNeil said that the number of refugees who would be helped is “not huge”-between 8000 and 1,000.

Why did Luke support it?

Luke has spoken out many times in Westminster about the importance of reuniting child refugees with their family members living in the UK. Current law also leaves many children in danger and at risk of trafficking and sexual exploitation. In September, Luke went to Calais to visit child refugees in Calais with Safe Passage UK, and saw first-hand the suffering experienced by these children.

“The Immigration Rules on refugee family reunification need to be expanded to give more children a shot at safe refuge with their family members in the UK. Children whose siblings of any age, grandparents, aunts, or uncles have refugee or humanitarian status in the UK, should be able to go live safely with their families in the UK.”

“Child refugees risk dangerous journeys to Europe to be reunited with their families. We have an opportunity now to change the immigration rules to help these children.”

“Britain has always provided safe haven to those fleeing war, genocide and attack and rightly so. We cannot afford to stand by while child refugees desperately seek our help. “

“The Bill is about families who have been torn apart by war and persecution and who long to be reunited but cannot be because of the current rules. It is about families who face the invidious decision of whether to stay separated or to undertake potentially dangerous journeys across land, desert and sea to be together again. This is not an immigration issue; it is a protection issue.”

“As one of the wealthiest countries, Britain has the capacity to support these people, who are in desperate need. What has been lacking is the political will.”

During the second reading of the Bill in the House of Commons, Luke Pollard MP was granted an intervention, in which he reaffirmed the obligation Britain has to support these unaccompanied child migrants, many of whom have been subjected to sexual abuse on their journeys.

Luke was proud to vote in support of this bill, which will allow more child refugees the ability to receive safe refuge with their families and will help reduce the number of tragic deaths that occur as a result of dangerous cross-border journeys.